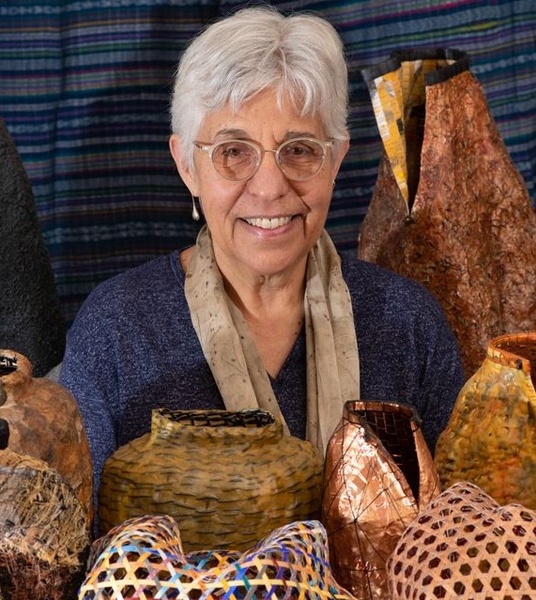 On Saturday, November 6, 2021, Jacalyn “Jackie” Abrams, loving mother, partner, sister, grandmother, aunt, friend, and engaged community member, passed away at the age of 72 in her home in Brattleboro, Vermont.

Jackie was born on January 19, 1949, in New York City. She grew up on Long Island and graduated with her Bachelors in early childhood development and Masters in education, both from the University of Massachusetts Amherst. She started out as a classroom teacher and quickly found her love for art, starting with a basket making apprenticeship in her 20s. She began as a traditional basket weaver and over her 46-year career as a fiber artist, her work evolved. Her creations explored colors, textures, materials, and mediums, and Jackie frequently sought ways to address social issues through art, particularly around the role of women, political persuasions, and the environment. Her work throughout the years included deep collaborations with other artists.

A main focus in recent years was to raise awareness of the extreme range of homes and shelters throughout the world. Jackie continued to create up until her final days, even while living with cancer, including a retrospective show highlighting the diversity and creativity of her career. Jackie loved to say that her greatest creations were her two daughters, Dani and Rina Rose. She raised them in Vermont, where she lived for over 40 years.

Jackie worked and taught internationally, was known for her creativity, and was deeply involved in her local community through volunteering and many art groups. She also practiced Buddhism and had a strong spiritual connection. She was an avid traveler, both for work and pleasure, and found great joy learning from and working with local artists and indigenous women wherever she went. Her community was truly worldwide.

Jackie loved teaching, reading, walking, yoga, and gardening, and was a lifelong learner. She was an animal lover known for feeding birds, taking in stray cats, and talking to the chipmunks. She also adored her grandchildren and took every opportunity possible to spend time with them. She was incredibly generous in all aspects of her life.

Jackie was preceded in death by her sister, Deborah, her father, Moe, and her mother, Eleanor. She is survived by her long-term partner, Mary, sister Roberta, brother-in-law Robert, daughters Dani and Rina Rose, sons-in-law Reginald and Brandon, and grandchildren Mace, Esteban, and Taye.

In lieu of flowers, memorial donations in her name can be made to Groundworks Collaborative (https://groundworksvt.org) or North Country Studio Conference, who established their first "legacy scholarship" for students in honor of Jackie (https://ncsw.org/jackie-abrams-legacy-scholarship).

To order memorial trees or send flowers to the family in memory of Jacalyn Abrams, please visit our flower store.
Send a Sympathy Card