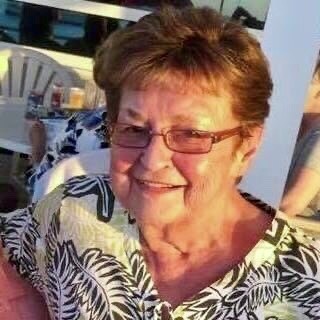 Martha Frances (Cloutier-Hanagan) Rouillard, 80, of Deering, NH passed away peacefully surrounded by her family after a lengthy illness.

She was born on September 25, 1941, to Maurice Cloutier and Marguerite (Beliveau) Cloutier in Manchester, NH.

Martha was the wife of Marcel Rouillard, they married in Deering, NH.

She was a graduate of Manchester Central High School. After high school, Martha began her career in the insurance industry at Roger F. Cote insurance agency where she was the Vice President, she then moved on to Wieczorek Insurance, and retired from Acadia Insurance. Martha enjoyed gardening and was a member of the Manchester Garden Club. She also was a member of BETA Sigma Phi, a women’s sorority, the sorority was an International Women’s Social and Charitable Group. During her retirement she enjoyed living in St. Petersburg, FL during the winter and spending her summers at Oxbow Campground.

Martha was predeceased by her son, Scott Hanagan.

SERVICES:  Relatives and friends are invited to greet the family during the Celebration of Life from 3-5:00pm on Tuesday, August 23rd, 2022, at the Cremation Society of NH, 243 Hanover Street in Manchester, NH.  A Memorial Service will immediately follow the Celebration of Life at 5:00pm at the Funeral Home. In lieu of flowers memorial donations may be made to the Manchester Animal Shelter, donations can be made at this online link -
https://interland3.donorperfect.net/weblink/WebLink.aspx?name=E101809&id=16 or by mail to 490 Dunbarton Rd. Manchester, NH 03102.

Assisting the family with arrangements is the Cremation Society of NH, Manchester.

To order memorial trees or send flowers to the family in memory of Martha Frances (Cloutier-Hanagan) Rouillard, please visit our flower store.
Send a Sympathy Card