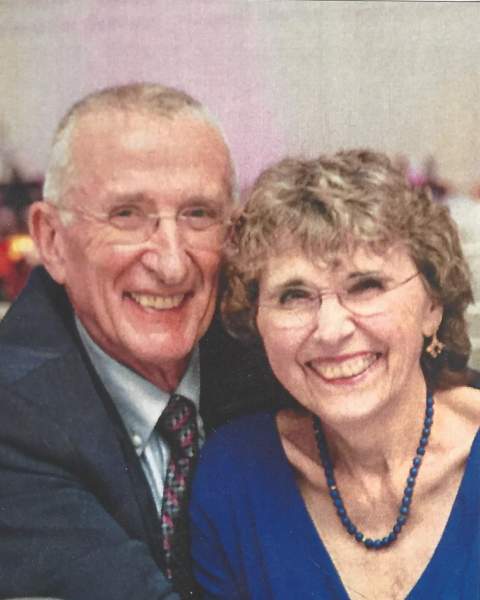 It is with great sadness that we announce the passing of Penelope Louise (Landry) McGarry, who died on September 1st surrounded by her loving family at home after a long struggle with pulmonary fibrosis. Penny was born on July 18, 1947, in Lynn, MA, the second daughter of Leo and Lorna (MacOrquodale) Landry.

Penny grew up in Saugus, MA and graduated from Saugus High School in 1965. She went on to attend Massachusetts College of Art and graduated in 1969 with bachelor’s degree in art education. She taught in Wilmington, MA school system for 3 years and then “retired” to raise her three children, Jessica, Rachel, and Timothy. In 1989 she began work again at the Deerfield Community School as a paraprofessional and then, following obtaining her NH teaching credentials, as an art teacher in Deerfield.

Penny was a member of Girl Scouts and had achieve the “Curved Bar” which is the Girl Scout equivalent of Eagle Scout in Boy Scout.

Although she lived just two blocks away from her husband to be, Fred, he was just the boy up the street until they started dating in 1964. They were married in 1967 after Fred obtained his bachelor’s degree. During the year before their wedding, Penny sewed her own wedding gown.

Upon Fred completing his master’s degree, they moved from Saugus to Derry, NH. After purchasing land in Deerfield, Penny set to work in designing the floor plan and exterior of their house. They moved into the new home one week before their first child, Jessica, was born.

Penny went into business with a friend to form Sunshine and Shadow Quilt Shop, supplying fabric and materials for quilting. Their business plan changed, and they added providing printing services to engineering firms in Concord and Manchester as a woman owned business.

When Penny was not taking care of her children and grandchildren she enjoyed traveling, enjoying trips to Barbados, Barcelona, Spain, Denmark, Germany, England, Egypt, and visiting her son and his family in Alaska.

Penny was predeceased by her son James Johnathan who died shortly after birth and her parents Leo and Lorna Landry. Penny is survived by her loving husband of 55 years; Frederick McGarry of Deerfield, NH, her daughters; Jessica Jellison and husband Greg of Bath, NH, Rachel McGarry and husband Kris Wright of South Paris, ME and son; Timothy McGarry and wife Samantha of Lancaster, NH, and her six grandchildren; Alyssa, Moriah, and Victoria Jellison, Mitchell and Kaiah McGarry, and Fiona McGarry. She also leaves behind her sister Pamela Strout and husband Carl, Nieces, and Nephew; Lorna Cerboni, Bonnie Jean Zackula and Carl M. Strout, Courtney Webber, and Caroline McGarry.

A memorial service celebrating Penny’s life will be held at the Deerfield Community Church on Sunday, September 11th at 2:00PM. In lieu of flowers, the family asks to consider making a donation to Granite VNA of 30 Pillsbury Street, Concord, NH.

Assisting the family with arrangements is the Cremation Society of New Hampshire, Manchester.

To order memorial trees or send flowers to the family in memory of Penelope Louise McGarry (Landry), please visit our flower store.