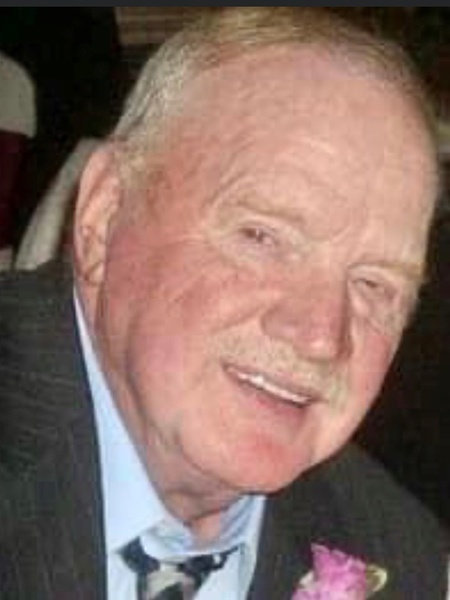 Robert E. Locke, age 88 passed away peacefully on August 2, 2022 at his home surrounded by his daughters Susan and Allison. Robert, Bob or affectionally known as “Red” was predeceased by both his parents, Henry E. Locke and Eleanor W. Locke, of Hooksett, his two brothers, James and Bruce Locke. Robert is also predeceased by his wife of 59 years in 2017, Patricia S. Locke and his son Timothy Locke who suddenly passed away at the age of 58 in 2021.

Red attended Hooksett schools and went on to Concord High School in Concord in which he played in the school band.  After graduation, Robert enlisted in the USAF as an Airman in 1953 and was stationed at Otis Airforce Base in Massachusetts until his honorable discharge in 1957. He received the National Defense Service Medal, Good Conduct Medal and the Air Crew Member Badge.

After his military service, Red went on to be employed at Sprague Electric in Concord until his retirement at the age of 55.  He then went on to work side by side with his brother Jim at JH Plumbing and Heating for several years.

Robert was a member of the East Concord Lamplighters, Sprague Electric Men’s Bowling League and the Concord Men’s Sunset League in which he managed a team sponsored by his brother Jim’s company for many years.  Red had a close-knit group of friends that he constantly entertained them with his story telling.  You could find Bob striking up a conversation at the grocery store, gas station, or any function he may have attended.  If any award was ever to be given, he would receive the “The Gift of Gab” award.

Red had always been an avid outdoors man all his life and loved any type of hunting.  He loved to fish, may it be brooks, streams, ponds, lakes, winter or summer, especially Three Ponds that was his beloved fishing spot. However, Red and sea fishing never were a good match. Even if he did or did not catch a fish, he came home with a scorching sunburn! He loved to share his passion of hunting and fishing with family and friends. Bob loved to reminisce on his life with his family and the traditions that he had. He enjoyed many things in life including planting his vegetable garden, going to the casinos, attending concerts, theater productions, attending family gatherings and traveling in his later years.

He is survived by his daughters Susan J. Nichols and her husband William, Allison K. Swindlehurst and her husband John, all of Dunbarton NH. He also leaves behind his eight grandchildren:  Christina, Michael, Marcus, Laura, Megan, Hannah, Rachel and Keith, plus 13 great grandchildren: Brianna, Coleman, Jacob, Reese, Liam, Dylan, Lauren, Ellison, Austin, Easton, Carter, Mackenzie and Caroline. He leaves his sister Kay Culberson of Pembroke, a brother Gary Locke and his wife Rosy of Concord, several nieces, nephews, cousins and friends. He also leaves behind his loving companion, Marilyn Woods, whom he shared many memories and adventures in his later years.