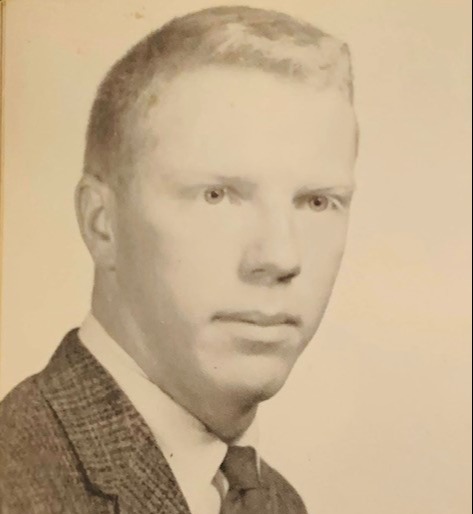 Robert Bruce Makinen, 77, of Manchester, NH, passed away Sunday May 1, 2022. Born November 30th 1944 to parents Carlo and Margaret. Bob was born in Fitchburg MA and raised in Lunenberg. He spent many years, post retirement, residing in Florida, before moving back to NH to be near family.

In his life he held many titles such as police officer (MA & NH), teacher, including special needs individuals, and accounts manager. His most treasured titles were Dad to Michael and Erik, and Grandpa to Deanna and Troy. His personalized plate read MEDT.

Bob enjoyed crossword puzzles, and watching the Patriots and golf with son Erik, and family friend Philip Capello, and his most favorite dog, Sadie. He loved son Erik’s chili, a cold beer, and sipping on Jameson’s or Dr. McGillicudy’s Butterscotch, and his one cigarette a month. He also enjoyed karaoke, doing a wonderful version of “Ring of Fire” by Johnny Cash. He was a lifetime member of Club Canadian, and a member of Workmen’s Club, both in Manchester. He was a member of a karaoke group called, “The Slanted Clams” with son Erik, and friend Stephen Martin. His most favorite pastime, of course, was spending time with family.

He was proud of his Finnish heritage, and many family members are going to get his St. Urho tattoo in his honor, including the zip code for Makinen, Minnesota.

Bob will be deeply missed by those who knew him. He had a wicked sense of humor and loved a good joke. He loved Wendy’s food, seafood from Maine, and good people. He had an ever present twinkle in his baby blue eyes. He was a strong and independent man; humble, and never wanting to put anyone out. He was endlessly appreciative of anything anyone ever did for him.

It’s hard to summarize the life of a man who was so deeply loved, and such an integral part of our lives.

He leaves behind brothers Carlo “Carl” Makinen and Barry (Cyndi) Syrjanen and sister Ellen  “Janie” (Syrjanen) Withington. Sons Michael Makinen (partner Pauline), and Erik (Sarah) Makinen. Grandchildren Deanna (Jennifer) Makinen, and Troy Makinen, and step granddaughter, Emily Defrain, as well as other beloved family. He also leaves the Mother of his children, former wife Carol (Damaso) Cordero, and former wife, Sue Billings, who he remained good friends with, and who was a regular visitor to the hospital and hospice.
To order memorial trees or send flowers to the family in memory of Robert Bruce Makinen, please visit our flower store.
Send a Sympathy Card