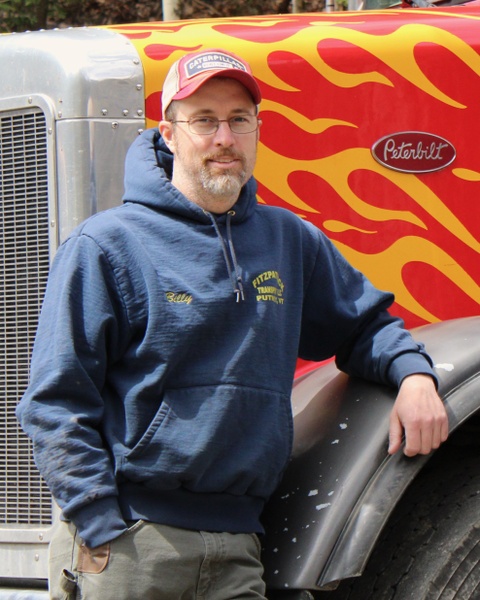 William Ellis Fitzpatrick, 42, of Guilford, VT, died August 9, 2022, at home surrounded by his family after a four-month battle with pancreatic cancer.  He was born on June 18, 1980 in Brattleboro, VT, the son of William B. Fitzpatrick and Debra A. Fitzpatrick of Putney.

Billy graduated from Brattleboro Union High School in 1999.  He attended a trade school in CT briefly, but decided that working was more suited for him.  He began working for Rod’s Towing and Repairs in high school where he helped pump gas and drove wrecker for several years.  He then worked at Bond Auto Parts and for Derrig Excavating until 2005 when he and his father formed Fitzpatrick Transport, LLC where they were partners together for seventeen years.  He was most commonly seen in the red Peterbilt with yellow flames, but over the last few years had fallen in love with hauling logs.

On July 2, 2011, Billy married the love of his life, Danielle (Clark) Fitzpatrick in Dummerston, VT.  They welcomed their son, Westen, in 2012, and their daughter, Lyla, in 2017.  Together they lived in Dummerston until February 2022 when they moved to Guilford.  He was a loving and devoted husband and father, and his family was the most important part of his life.

From the moment he could walk, Billy fell in love with trucks, which turned into a rewarding career spent playing and working with them.  He had an amazing ability to create and fix anything he wanted, from the lawnmower he made into a wood splitter, to the 67 chevy pickup he jacked up and put a diesel motor in.  If he was not working or spending time with his family, he could be found at home tinkering on a project.  He enjoyed four wheeling with his wife, kids, friends, and even could occasionally be found four wheeling with his trusted companion, Diesel (the family dog) who also enjoyed riding with Billy in all of his trucks.  A family favorite was going for Sunday drives in his 69 International.  He made many unforgettable memories with those he cared for.  Billy was a selfless man who would never hesitate to provide help to a friend in need.

Billy is survived by his beloved wife of 11 years, Danielle, their 10-year-old son, Westen and 4 year old daughter, Lyla, parents, William “Bill” and Debra Fitzpatrick of Putney, VT, sister, Jennifer Fitzpatrick of Bolton, MA along with her husband, Jonathan Tenney and their daughter Olivia, as well as his grandmother, Rosalie Derrig of Putney, VT and many aunts, uncles, cousins, in-laws, and an entire community of friends.

Billy’s family would like to thank everyone for the outpouring of love and support since his diagnosis in April 2022.  From the car shows held at Harlow’s Sugar House, to the Truck Parade and the numerous calls and cards over the last four months, each and every one of you are very much appreciated.  Billy was one of those genuine “one of a kind” guys.  He would do anything for anyone and was truly loved by anyone he came in contact with.  This was evident with everyone who has shown up in support over the last several months.  His death has left a significant hole in hearts of his family and the community.

A celebration of life will start promptly at 10AM on August 20, 2022 at Lynde Well Drilling, 5345 Hinesburg Road, Guilford, VT.

In lieu of flowers, his wife has requested that you choose one of the following organizations to make a donation to in Billy’s memory.  All four played a significant role in the last months of his life, and he was grateful for their guidance and care.  Pancreatic Cancer Action Network “Pancan” who provided guidance to his family every step of the way, Brattleboro Memorial Hospital Oncology Department who provided care to Billy throughout his cancer diagnosis, The Hand to Heart Project who provided relaxing massages to Billy at the end of his life, or Bayada Home Health Care who provided comfort to Billy and his family during the last two weeks of his life.

To order memorial trees or send flowers to the family in memory of William E. Fitzpatrick, please visit our flower store.
Send a Sympathy Card